The ringleader of the British weed empire is looking to offload his business and retire to a quieter life , though things become a whole lot messier when rival factions realise whats up for sale. Guy Ritchie serves up another British gangsta cracker!

Following an accident, a young musician wakes up in a world where The Beatles never existed. An opportunity arises to make the most of the situation, and our musician sees the chance to write some of the greatest pop songs of all time! Gotta earn that $$$$$ right? 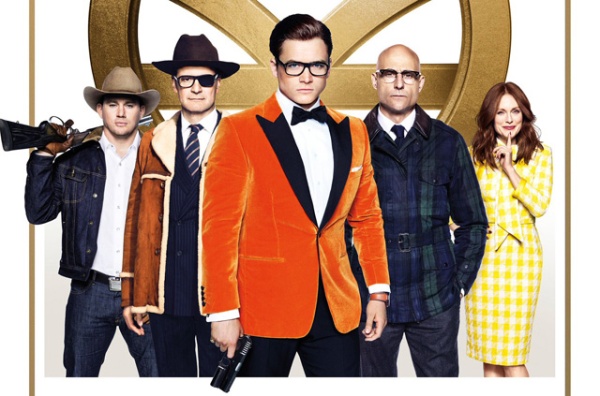 Our review of Kingmans : The Golden Circle is up on YouTube, check it out! 😀 Make sure to subscribe 🙂 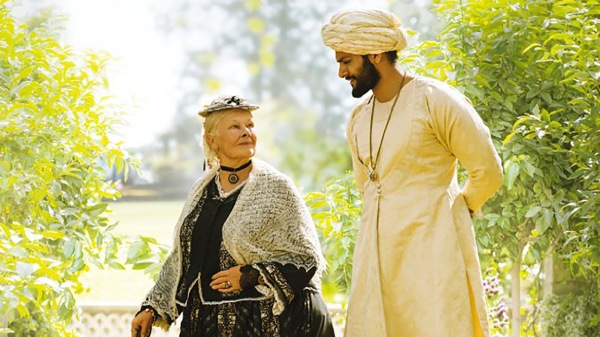 This is a story that you might find difficult to believe. Adapted from a book written by Sharabani Basu, which is based on the journals of Abdul Karim recently discovered in India; we see an unlikely friendship develop between a common Indian Muslim man, and the Empress of India and Queen of the United Kingdom of Great Britain and Ireland.

I personally don’t think there’s a cast or director out there who could have done a better job portraying this particular story. Dame Judi Dench (James Bond, Philomena, Mrs Brown) once again takes on the role of Queen Victoria, alongside Ali Fazal (Furious 7) as Abdul Karim; surrounded by other brilliant actors (Michael Gambon, Eddie Izzard, Tim Piggot-Smith, Olivia Williams) playing the members of the court disgusted and insulted by the development of this relationship. All led by the director Stephen Frears, who was present for a Q&A after the screening, his most recent successes include The Queen with Helen Mirren, Philomena with Judi Dench, and Florence Foster Jenkins with Meryl Streep. 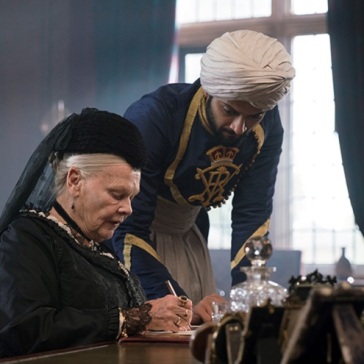 Dench and Fazal at the Queen’s writing desk 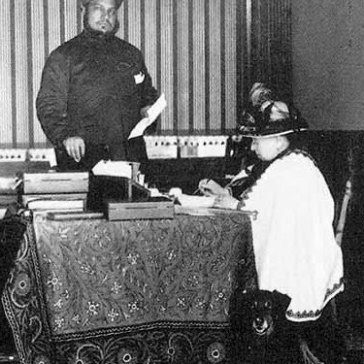 The film begins in India and follows Abdul’s journey to England to be involved in the Queen’s Golden Jubilee; after some actions deemed highly inappropriate by the court, the Queen decides to keep Abdul close and begins to learn much about India and Islam from the man the court repeatedly referred to as “one of the Hindus”. She confides in Abdul, revealing her more vulnerable side to the audience, regarding her feelings towards her position and life in general. Although the beginning is quite humorous with many good laughs from both Dench and Fazal throughout, the film takes a darker path as we continue to learn about the Queen’s difficult life, and the court’s ignorance and prejudice against Abdul.

It is a difficult time, with Muslim-led mutinies against British rule breaking out in India, and some deceptions by Abdul does not help his case against the accusations by the court and Prince Edward or “Bertie” (Eddie Izzard). Regardless, the Queen keeps him on as her “Munshi” (teacher), she describes herself as being truly happy for the first time in a long while, and likely as an intentional provocation. Despite numerous attempts to discredit Abdul and blackmail the Queen, Abdul was in the service of the Queen for the final 15 years of her life. This, along with many incidents in the film, appear to be close to the real events that took place over 100 years ago. 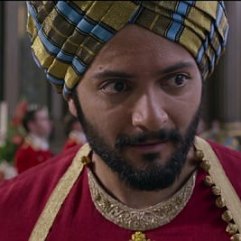 His first sight of Victoria 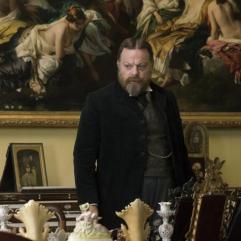 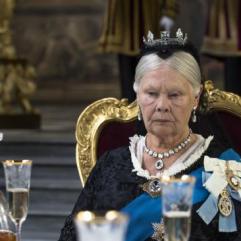 I believe that the performances in this film were emotive and believable. It was quite a different kind of performance from Eddie Izzard than what we are used to, but he gave a strong and compelling portrayal of the jealous heir to the throne. One character who may not get as much notoriety is that of Mohammed (Adeel Akhtar), he is the other Muslim, Indian man involved in the Queen’s Golden Jubilee. However, he is not lucky enough to have captured the Queen’s attention and is kept in England against his will and in detriment to his health. Nevertheless, he remains faithful to his Indian brethren despite attempts of the court to get him to disclose information about Abdul. Of course, Dench and Fazal are touching in their representations; you laugh when they laugh and you cry when they cry. You feel as amazed as Abdul does in his new experiences, and you feel as trapped and depressed as Victoria does as monarch.

The Q&A with Stephen Frears gave an interesting insight into the making of this film. He was very blunt and to the point in his answers, extremely matter of fact. We found out that it only took 10 weeks to complete filming and it was the first production allowed to film inside Osbourne House, a former Royal residence on the Isle of Wight. He admitted he enjoys making provocative films that test the waters and opinions of the time; despite this fact, we were told the actors were professional and generally of a liberal mindset, this meant the idea of pushing any boundaries or causing controversy did not phase anyone involved.

In conclusion, I highly recommend seeing this movie; it’s fun, silly and emotional, with stellar actors who perform to a high standard. The story is simple but not one that’s been told before, and will make you want to more about this beautiful, heart warming, and unlikely friendship. 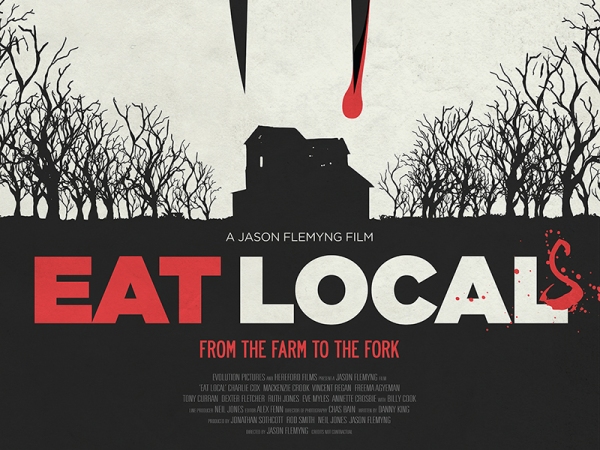 Last weekend I was lucky enough to be invited to the premiere of the British made “Eat Locals” at FrightFest in Leicester Square. I met the director, producers and cast, and got to watch their hilarious creation.

With a low budget of just £1.6 million, you are not expecting “Tchaikovsky” as first-time director Jason Flemyng put it in our interview, you are expecting a fun piece of cinema lovingly put together by a group of friends. And that’s exactly what we got. After quite a sincere start, you soon realise that the actors are not taking themselves so seriously, creating a more laid back (and surprisingly realistic) environment than any other modern vampire movie you will have seen – until the violence commences.

In a quiet country farmhouse, 8 British vampire overlords have met to discuss matters of feeding quotas and territories. Following the death of one of their own, they will also decide whether to turn or kill poor, unwitting Sebastian (Billy Cook); led to the farmhouse by sexy vamp Vanessa (Eve Myles). Before they can carry out their verdict, the vampires are interrupted by a team of Elite vampire-killers sent by the Vatican and under orders from Captain Bingham (Robert Portal) and Larousse (Mackenzie Crook), chaos and blood shed ensues.

The dialogue in the vampire meeting is natural but quite serious (with a slightly eerie and ominous soundtrack), making reference to some current events and expressing a few opinions on such matters (from a vampire perspective of course). The conversation devolves into quite a grim scenario, but with the introduction of Sebastian humour is injected into these scenes. This is later followed by what sounds like a pretty horrific scene between the vampires and some soldiers. This variety of scenes display a contrast of character and a breadth of acting ability; they attempt to be both modern, civilised individuals, and the viscous vampires they are. Others are just viscous vampires *cough*Tony Curran*cough*.

Converse to Tony Curran’s crazy portrayal of vampire “Peter Boniface”; Charlie Cox, having been temporarily poached from Netflix and Marvel, plays a slightly softer vampire than some of the others. His character “Henry” is a vampire who refuses to feed on humans,  and tries to keep the peace between his fellow vampires and keep young Sebastian alive during the battle.  Between martial arts proficient Chen (Lukaz Leong) and sweet old Alice (Annette Crosbie) with an assault rifle, there’s plenty of action for everyone to sink their teeth into. And with Jason Statham directing the fights, it maintains a good level of ridiculousness. 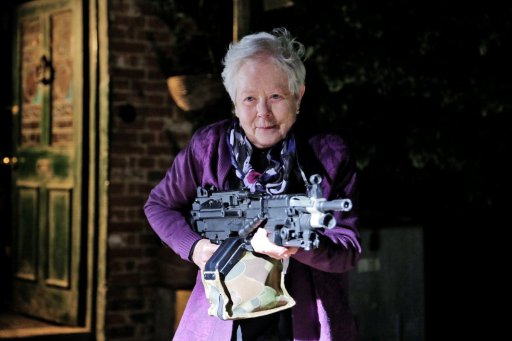 You grow to seriously dislike “Captain Bingham” and “Larousse”, which is always key to making good villains and gets you rooting for the vampires; however, even though he was on their side, I liked “18” (Johnny Palmiero). He was terrified of the vampires and sympathetic to the Thatchers (Dexter Fletcher and Ruth Jones) who own the farmhouse, both of which make him smart and a good person, which I like.

There’s a few twists and little surprises, and many, many, MANY laughs. Everyone in the cinema was laughing along, cheering for their friends when they came on screen, and woo-ing whenever anyone did anything cool. Eve Myles was sat in front of me and believe me she was LOVING every minute of it. 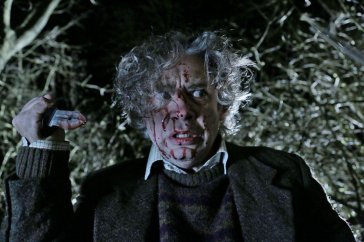 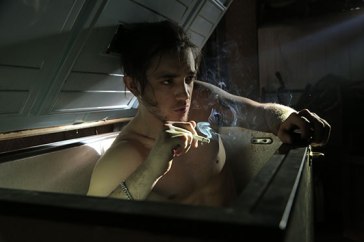 If you want something that is easy and fun to watch, and are a fan of something a little silly, you definitely need to watch this film. But ensure you begin with no expectation of this being a masterpiece of film making. The cast and crew have clearly had a fantastic time making this and we all had an awesome time watching it with them.

It’s also nice to meet people who you’ve been watching on screen for years and find out they’re genuinely nice, funny people.

And Jason, as promised, I think I’ve been pretty nice 😉

Check out the Live coverage and interviews here: https://www.youtube.com/watch?v=LYUi79fR1no