Following the overwhelming success of the last film, the new Jumanji crew find themselves back inside the dangerous video game, but surely having beaten it once, the second time should be a doddle?………….

It’s a clash of two worlds as everyday man Stu, picks up the wrong customer in his Uber. A rugged vengeful cop drags our reluctant hero into a crime fuelled escapade. It’s good honest fun! 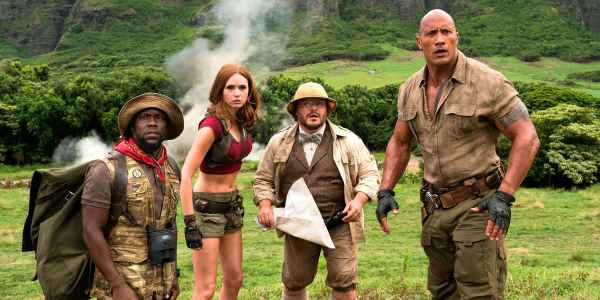 When Jumanji : Welcome To The Jungle, was announced, it was met with much derision from fans. Was this really necessary? Will it ruin the fond memories of the original starring Robin Williams? Jumanji, unlike Dwayne Johnson’s previous attempt to revive some 90s nostalgia, Baywatch, Jumanji :Welcome To The Jungle is an exuberant joy ride from start till end!

The story here has been shifted to the current millennial age,  and in order to fit this time, the Jumanji board game has become a retro video game, basically evolving to survive in a time when board games are of little interest! Our protagonists, whom are all the usual high school stereotypes, end up digging out the video game while being thrown into detention together.  The twist here though, is unlike the original, where the game came to them, here, they get sucked into the game!

To make things even more interesting, our students end up in the bodies of the avatars they selected for the game. Spencer (Alex Wolff), the nerdy gamer is now in the body of Dr. Smolder Bravestone (Johnson), a 6″5, 250lb hero, with no real weaknesses. Fridge (Ser’Darius Blain), the school jock, is the diminutive Franklin “Mouse” Finbar (Hart), who is essentially Bravestone’s assistant. Bethany (Madison Iseman), the selfie obsessed cheerleader, ends up as she says ‘a middle aged fat man’ in Professor Sheldon “Shelly” Oberon (Black).  Martha, our shy, introverted teen, is now the confident & dangerous Ruby Roundhouse (Gillan). 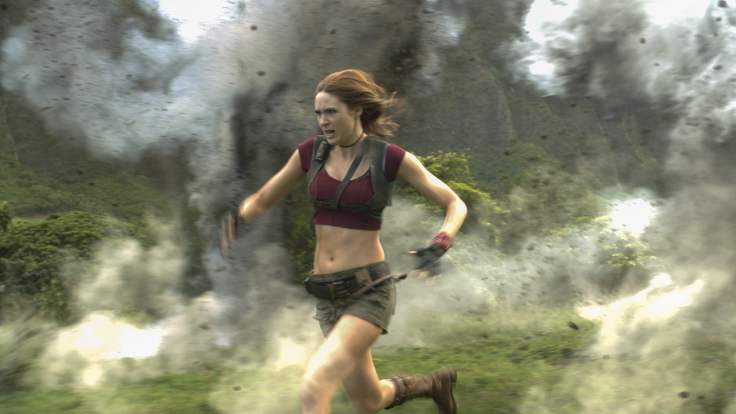 The story is simple, get the Jaguar’s Eye, a magical gem, back to its resting place, to save the jungle, though it’s not as east as it may seem. Each of them are limited to 3 lives, and not only is the jungle trying to kill them, but the villainous Van Pelt (Cannavale) is also in a deadly pursuit of the gem.

The body swapping angle is really what makes this film shine.  With most of our all star cast playing roles that they don’t play. The Rock, is someone who is the opposite of the charismatic mountain of muscle that he is. Jack Black is having a blast playing the bratty teen diva, and Gillan is still an insecure teenage, even though in the game she is a beautiful lady who can also kill you swiftly with her deadly martial arts skills! It’s really only Kevin Hart doing his usual routine, but even then, his interactions with Johnson is golden. Finbar, who in reality,  is the athletic, tall, confident jock,  has to come to terms that in the game, he really is none of that, and it’s in fact Spencer, who he looks down upon, who is the real hero.  All four of the cast work great, and really excels the movie to something more memorable.

The video game plot also adds plenty of laughs for all the gamers out there. From NPCs, cut scenes,  and character strength & weaknesses, there are various little details that give the film a charming gloss.  This really makes the film stand out from the original, so they really cannot be compared directly.

The only thing that really does bring the movie down, is the laughably poor villain. Van Pelt really wasn’t needed, and could have been removed from the story altogether.  All it did was extend the run time, and remove the excitement from the film whenever it cut back to whatever he was up to. The story line would have worked perfectly well if it was a simple task of going from A to B, with the jungle trying to defeat you.  The villain was just a distraction, and never really proved a threat.  Villain aside, the film doesn’t really make the most out of the 3 lives gimmick, at no point, do you ever really fear for one of the main characters biting the dust, considering the menacing environment they are in.

Jumanji : Welcome To The Jungle is amusing holiday film, with a wonderful cast, humour, and surprisingly intense action scenes, it really is a blast. Only downside to it really is the mediocre villain, who helps bloat the movie to over two hours.  Even with that, the film pretty much stands on par with its 90s counterpart.