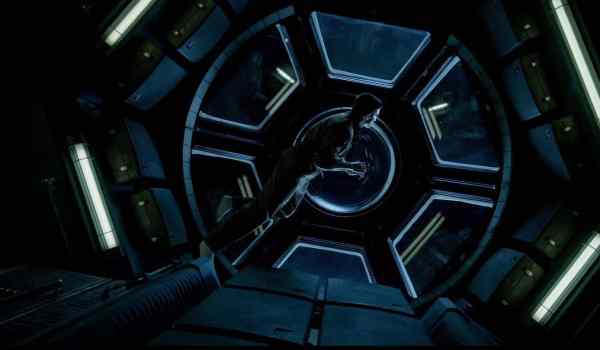 Life, follows a star studded cast, as a group of astronauts on the International Space Station. who happen to bring on a surprise visitor, who happens to be a lot more sinister than first presumed!

The crew on the ISS manage to recover a capsule, containing various samples from a recent Martian mission. Amongst all the specimen of rocks is one curious sample, it turns out that the crew have managed to successfully find life on Mars! With the news relayed back to Earth, they honour the new organism with the name Calvin, which seems innocent enough, before Calvin wakes up from his slumber!

On board, we have Dr Miranda North (Ferguson) & Dr David Jordan (Gyllenhaal) as the medical officers of the station, and also the main  characters the movie follows. Also on the team is Adams (Reynolds) the ISS pilot, Derry (Bakare) the stations British biologist. Murakami, the teams Japanese engineer and Golovkina, the Russian commander. It’s only fair the International Space Station has an International cast!

It’s our biologist that develops a close affinity with Calvin, and it’s his curiosity that ultimately leads our Martian friend on its warpath! After some mild experiments to monitor the growth of Calvin, it’s the electrical stimulation that sets off its survival instincts, and from that point on, the movie becomes an intense thriller!

Calvin is most certainly the highlight of this well-made space chiller, as the film progresses, it gets more and more advanced, not just physically, but also its intelligence. Our astronauts have to get more tactical against its threat, as the crew gradually starts to get taken out. Speaking of the deaths, the film is pretty graphic at times, as our alien fiend starts absorbing its prey in various gory methods. It does feel a bit over the top at times, but it does well in showing how weak our crew is, up against this relentless threat. Could there be a greater fear than drowning…in Space?!

As with most recent films set in Space, such as Interstellar, Gravity & The Martian, Life is incredibly beautiful,  the shots of Earth, the Sun, and various other scene out of the station are gorgeous, and makes the whole movie look so much more polished. If the CGI looks bad in a Space movie, it would have a hugely negative effect on the whole project.

It’s clear that the film takes a lot of inspiration from Alien, which is no way a bad thing! Daniel Espinosa directs a wonderfully eerie set piece. Where the movie excels, is in the stalking aspects of the film. As Calvin slips away, all our crew can hear is the various thuds as our predator crawls around the metallic interiors of the station. This is extremely well executed when Calvin is in its earlier phases, as its smaller body allows it to sneak around in all manner of places, and jumping out from the smallest of gaps! As it grows, it does get a bit more comical, as it grows a face and limbs, along with a cheesy ‘monster vision’ scene.

So how do our crew preform here? Reynolds is obviously the most charismatic, with his jovial nature and comic relief. Upcoming British actor Ariyon Bakare is great as the Scientist who develops an almost family like affinity to his new discovery, his character also has a disability which plays well into the story-line.  Our two medical officers don’t’ really have much to shout about. Gyllenhaal’s character hates life back on Earth, and prefers the solitude of Space, though they don’t really go into too much detail on why this really is. His pretty much grumpy throughout the movie, where a bit more emotion would have been better, considering the situation they found themselves in. Rebecca Ferguson character is fairly bland, and probably shouldn’t have been the main focus of the film, her role in Rogue Nation was far superior.

As a whole, the movie succeeds in what it attempts to do, Calvin steals the show wherever it appears, the sheer terror the crew faces every time they are confronted with it is well captured. The nature of the deaths also makes the audience feel nervous and uncomfortable, which only helps build the suspense. The dull nature of of main protagonists does hold back the movie from being a truly memorable, and the utterly predictable twist at the end is so expectant, it’s almost funny when it happens! Life isn’t the perfect space thriller,  but it’s definitely worth checking out if you love Space movies, especially ones containing savage aliens on board!