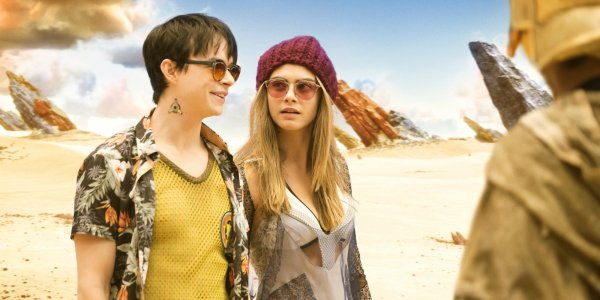 Valerian and the City of a Thousand Planet is based off Valérian and Laureline, the long running French Sci-Fi comic series, that ran from 1967 to 2010. Director Luc Besson has been a fan of this franchise since his youth, and has long dreamed to bring the characters alive on the big screen. In a summer full of remakes and reboots, Valerian at least offers audiences something original. Will it be a breath of fresh air?

Valerian (Dane DeHaan) is a Major within the Alpha space station. An enormous structure which has built up exponentially, since its early years as the International Space Station. Alpha is now a sprawling galactic community containing thousands of alien races and over a million different languages. Valerian is tasked to keep the peace and well-being of the citizens, along with his partner Sergeant Laureline (Cara Delevinge). It’s soon revealed there is an imminent threat building up within the core of the colony and our heroes will need to find out what’s causing it & prevent the downfall off Alpha.

It’s always a gamble using source material that the general public are unaware off.  But Guardians of the Galaxy has proved if you do it right, it can work like a dream. Unfortunately, Valerian simply lacks any charm or charisma that made Guardians a huge hit. This is down to the two leads, who are vastly unlikable, nor do you really care about their journey. Neither DeHaan or Delavigne have the personality or gravitas to carry a franchise like this on their own. There is no real character growth, and their arcs are no cause for any interest. Considering the budget on this film, near $200m, the highest ever for a French movie, it’s a curious decision for the movie to cast these two to headline the film.

Off the bat in Guardians, the audience immediately adore Starlord following the opening credits! Here, even after 2 hours, you still don’t care! We never get any background into the heroes, how long were they in the force for? What about their backstory? How long have they been a couple for? Their romance is put front and center of the movie, when it should have been a secondary plot. Why should we care about their relationship, when we hardly know who they are! Both characters have pretty much equal screen time, so it is a curious decision to remove Laureline from the movie’s title.

While the leads may not be the most enthralling, Besson has created a visually stunning movie. It’s clear to see how much The Fifth Element, which he also directed, had an influence here! It’s obvious to see that he was a big fan of the comics, and he does his best to recreate the vibe of something he is a huge fan of.  From the bustling metropolis of Alpha, to the paradise beaches of Planet Mul, the movie is overflowing with gorgeous visuals. The entire Pearl’s species were a nice distraction from the grim space urban jungle the rest of the film is set in.  A lot of effort has been put in to make the comics come to life, and for that, praise has to go to the director. The scene involving Valerian breaking through walls and traversing several different landscapes of Alpha while in pursuit is a riveting scene. The movie has several concepts that could have been explored in more detail. Such as the alternate dimension that seems to exist, the vast collection of aliens and locations we could explore. But the film does not stray too far for its comfort zone. If there is a second film, they have so much to work with!

But we never see more of this fascinating world; instead we have to sit through a bickering couple and various side quests.

The film suffers from random detours, which seem to solely exist to add to the films runtime. If its not randomly chasing a psychic jellyfish. It’s having to obtain a disguise to break into enemy territory. (When being a government official should be enough!). Though this is how we meet the most interesting character by far, Bubbles, the shape shifter played by Rihanna! In 10 minutes, her character gives us more reason to care about her story than our leading duo. The movie dropped the ball by not giving that character more screen time, rather than a side character. Ethan Hawke also has a blast as the ridiculously extravagant owner of one of the strip clubs Valerian finds himself in. The villain of the piece is Commander Filitt (Clive Owen), his actions are made clear early on, so it’s no surprise when the film reveals his history. His isn’t a truly evil person, more someone who sticks strictly to his military code. His revelation is not as shocking as they could have made it, and the final reveal is very underwhelming.

Valerian and the City of a Thousand Planet is not a bad movie, if you love Sci-Fi, then you should consider giving this a watch. The film does offer something original, so you have to give it credit for that. That said, the film never reaches its full potential, with the miscast heroes, the lack of character development and a plot that drags on for way too long, it fades away into a generic but beautiful summer release.