So last weekend, I decided to watch Mission Impossible : Rogue Nation again, because I was having a lazy Sunday! A wonderful film, but it got me thinking, which is the best one out of the entire franchise? Checking out the IMDB pages, I saw that it’s been 20 years since the first film came out, and that they have grossed over $2.7b in that time! (thank you http://www.boxofficemojo.com/ for that figure!). I doubt the makers behind the first film would have foreseen it still going strong two decades later! So in reverse order………..(this is just my opinion! so feel free to disagree 🙂 )

This sequel was actually the highes 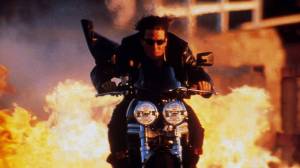 t grossing movie out of the original trilogy, but personally, I believe that was more down to the hype of the second film, rather than the substance. After the intense, espionage thriller that was the first film, director John Woo was bought in, and totally changed up the film. Woo is known for his over the top actions scenes, and this film had it all. Slow motion, sliding with two guns in hand, doves!  The plot was very generic, and the villain forgettable. What made the original great was its spy element, they tried to make this film more ‘Bond’ like, and it just didn’t work. For me, its the worst of the bunch!

There wasn’t anything seriously wrong with the 3rd installment, it was a perfectly good film, with a stellar cast, including the late Philip Seymour Hoffman, Laurence Fishburne, and the introduction of Benji, played by Simon Pegg, who has since become a fan favorite and series regular. The movie does do well in providing a more human side to the superspy persona of Ethan Hunt, showing a much more vulnerable side to him. J.J Abrams does a solid job after the disappointment of the 2nd film, but the feeling of franchise fatigue and a straightforward betrayal story line didn’t really entice anyone, with people asking if a third installment was even required!

The original, and probably the finest of the original 3 movies. To be honest, the CIA break-in scene alone makes the film stand tall. But it is so much more then that! Brain De Palma creates a cerebral thriller which not only had several action scenes, but also moments that required you to pay attention to a plot which could get complex, but it pays off in the end. Watching it for the first time when i was younger, the film was rather messy, but its on future viewings when you can really appreciate how all the plot points come together, and the end game is revealed. It’s startling how different this film is, compared to it’s direct sequel. There’s no slow motion, no corny action, just pure suspense!

It’s probably fair to split the franchise into 2 parts. The first 3, then the following films.  Both Rogue Nation, and Ghost Protocol have been by the biggest success of the series, and it’s not hard to see why! It’s a difficult decision in deciding which one I prefer, but personally, one scene in GP probably tips it in its favour. But make no mistake, RN is still not only one of the best MI films, but probably one of the most polished action films in recent times. The opening scene involving the plane taking off is ridiculously well done, and edge of your seat stuff. Though the scenes during the Opera at the Vienna Opera House is personally one of my favourite scenes in film. The entire scene goes perfectly with ‘Nessun Dorma’ being preformed in the background, the choreography is simply amazing.

There really isn’t much to separate the top 2, but GP has the edge, solely down to the Burj Khalifa scenes. The climbing segments are by far some of the most intense stunt-work you will see in any film from Hollywood. The fact Tom Cruise did this himself, adds to the wonder of these segments. The film also does great in rebooting the franchise after the luke-warm reception of MI3. They even went as far as removing ‘4’ from the title, to make it appear as a stand alone movie. Benji returns, and has a greater role, out in the field, and the character of Brandt, played by Jeremy Renner is introduced.  If there are any low points, its the fact the movie seems to peak in it’s middle arc, and the villain is total non presence. The movie does a spectacular job in producing several memorable set pieces, from the prison escape, Kremlin break-in and of course the Dubai set piece! So for that alone, its my favourite of the entire lot!

And just because this scene is SO well done…….here it is again!