It was back in Summer, I noticed a poster for Rings while at the cinema. Even back then, I was sceptical if this was even worth making, for a franchise that’s been dead in the water for years. My doubts were proved right, as Rings has to be one of the dullest horror movies I’ve seen for a very long time!

Rings is a reboot of the original 2002 release The Ring, the successful American remake of the cult Japanese horror Ringu. For anyone not familiar with the lore, The Ring revolves around a mysterious videotape, anyone who happens to watch the tape receives a phone call soon after, a voice telling them that they will die in 7 days’ time. The film is iconic for the vengeful spirit Sadako/Samara (depending on the region of the movie!) emerging from within the TV screen of the victim. The latest release aims to bring the movie into the current generation, a decision that takes the edge off what made the original so great.

So the plot, our main character, Julia, sees her boyfriend Holt, move to college. After losing touch with him after a couple of days, she decides to go to the college he attends to see what’s going down (instead of simply calling the college and finding out what has happened!). It is never explained why his mates are angry at her, but they are! For some reason. It’s here she discovers a morbid experiment that is being run on campus by one of the Science professors in secrecy, and Holt has been dragged into it. After Julia ends up watching the tape too, it’s a race against time to save herself before the 7 days are up!

For anyone who hasn’t watched the previous films, the only way to avoid your inevitable death, is to pass the curse on to someone else, by making a copy of the tape and making someone else view it, a selfish move, but one you make out of desperation. This concept plays a central role to the film, and while it’s a nice twist, it just feels abit rushed. We start off by seeing the Professor discovering the tape, and the next time we see him, not only has he converted the VHS to digital media, but he has uncovered the trick to getting past it, how exactly did he know this? We don’t know, it’s never explained!

The second half of the movie is incredibly dull & sluggish, as it becomes a mystery movie, we follow our couple to a town in the outskirts, as they dig up clues to unveil the truth. It’s here where the film just goes into 2nd gear and cruises along, the characters are just not charismatic enough for us to be bothered about their journey, and it’s a lot of talking, with random lazy jump scares thrown in every now and again.

The switch to modern media has definitely hurt the franchise. There is just something incredibly eerie when it comes to VHS, with its static and poor audio & image quality; it simply gives off a far creepier vibe than a high def movie file on a laptop!  The CGI in this movie is another downer, it’s shockingly bad. It’s so overdone, that Samara loses her aura, and looks like a character from a PS3 game! When she first appears out of a plasma TV, it’s so poor, you will end up laughing at how this quality was deemed OK for a big Hollywood release!  The abundance of CGI across the entire movie looks cheesy, and ruins the atmosphere.

The characters are utterly forgettable, Julia goes from ‘you’re so stupid for getting involved in this mess’ to ‘risking her life for this guy’ in one night! We don’t even know how long they have been together! The boyfriend is entirely useless in the movie; Julia does all the work. He hardly contributes anything, and even in the final showdown, he gets knocked out and plays no part whatsoever!  Johnny Galecki aka Leonard from Big Bang Theory seems miscast as the devious professor, and you just can’t take him seriously!  Vincent D’Onofrio does what he does, and is probably the best character in the movie; at least he got some backstory to his role! 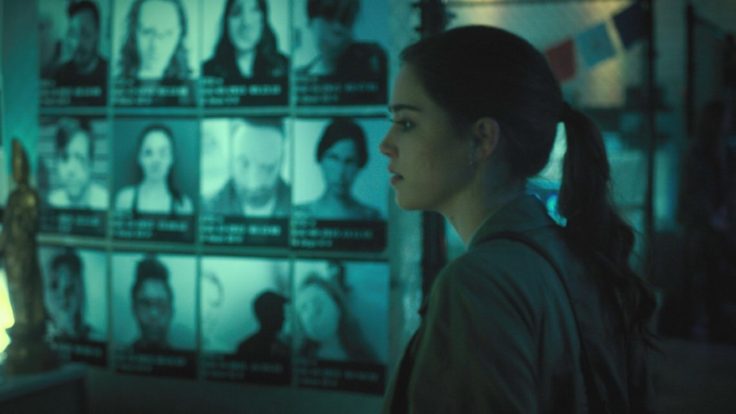 Though it may not be intentional, the move does rip off a scene from Don’t Breathe, which reminds you off a far superior horror film! The plot is predictable, you know when there will be a jump scare, and the choice of music is a curious one. A good score can make a good film great, but here, the soundtrack is overdone. It feels more like a video game than a horror movie. The opening scene on the plane is pretty hilarious, which sets the tone for the film! It would have done better to have more scenes with Samara, and less time seeing our couple wonder around digging up clues.

One other flaw is the blatant sequel baiting at the end, the film could have ended without it, and to end it with a nod to more potential films is poor form, considering how disappointing this film is. The ending is also shown in the trailers, which was a strange decision. So if anyone watched the trailer, they would know what scene is yet to come, another damaging hit to the films credentials. The trailer is also misleading in how the film is portrayed. We don’t see her suffer through 7 days as the curse develops, instead, she seems fine as she goes carries on with her mystery adventure, with no idea how many days have passed.

Rings is by far one of the worst horror films to come out in recent years, even beating The Forest from last year! Even The Forest had an original concept to play with; Rings had some great source material to work with, which is what makes it so crushing to see the movie stumble around.