It’s been 10 years since the first Transformers movie came out. Although it wasn’t the perfect movie, it was a thoroughly entertaining summer blockbuster. Since then though, the franchise has become a parody of itself, regardless of how poorly each of the 3 subsequent movies were panned by critics and fans alike, for director Micheal Bay, it was a huge money maker, regardless of the stagnation. The Last Knight marks the 5th entry into the series, will it be more of the same Bay-isms….or something fresh? 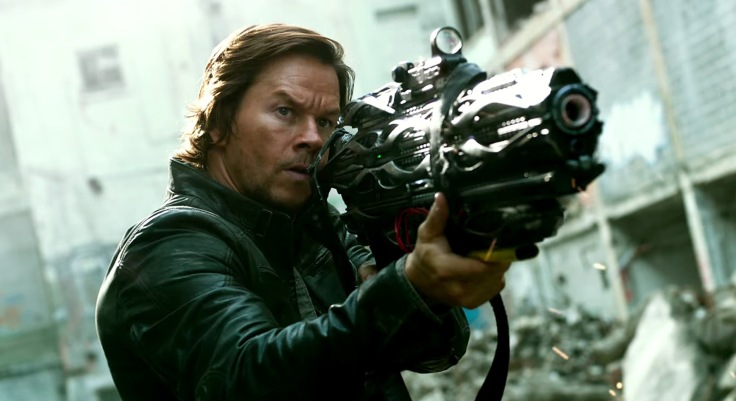 The plot, is the same as usual, we have our human lead looking for a random object (cube of something, the orb of whatever etc.) which is key to saving the world. In this case, it’s our hero from Age of Extinction,  Cade Yeager (Mark Wahlberg) who has to retrieve the Staff of Merlin, otherwise it’s all over (until the next film).

To be honest, we all know what to expect in these films, but you would think they would learn from their errors after all this time. The Fast franchise knew this, and gave itself a reboot at 5, to reinvigorate the series.  In a similar way, Ghost Protocol gave the Mission:Impossible franchise a breathe of fresh air. The trailers seemed like it may be going for a for ‘serious’ feel, but the movie reverts back to its comfort zone soon enough.

The trailers prominently featured Izabella (Isabella Moner), a young orphan who has survived the harsh realities of the ongoing conflicts and wars. She is a different kind of character to the usual, especially when it comes to the female leads, and could have had an interesting Father-Daughter relationship with Cade, who himself, is also suffering from the fact he had to lose all contact with his own daughter following AoE. Instead, she disappears for a vast portion of the film, and the film goes back to its usual attractive yet dull leads. Viviane Wembly (Laura Haddock), the Oxford educated possessor, plays a far more important role, though her character was barely featured in all the build up. Though her character actually has a far more important role than previous characters.

Speaking of disappearing acts, the main attraction, Optimus Prime barely features,. His arc follows Prime being brainwashed by our main villain, Quintessa, to do her dirty deeds and work for the enemy. Prime as always, is by far the best part of these movies, and to have him barely feature is just dire. Yes, Bumblebee is still doing his stuff, and working in a few scenes to set up his own future solo adventure. But at the end of the day, Bee simply lacks the awe of Optimus.  Megatron is also barely featured, and when he does show up, he is more of a joke character now, rather than the equal of Prime.

One of the common thread of criticisms in the entire series is the constant focus on the human characters.  Yes human characters are required, but they really should be the supporting cast, yet the entire middle chapter barely features any robot action,. Instead it tries to go into a overly complex, and frankly boring medieval history lessons on the background of the Cybertron with human history.  The film simply tries to weave an unnecessary lore into all this, the entire ‘Last Knight’ plot is dull, and you just want it to jump to the finale, where all the fun happens!

There is also too much happening in this movie, you have Cade, Izabella, Megatron, Vivian, The TFR (Transformers Reaction Force) lead by returning Lennox (Josh Duhamel),  Optimum Prime, The Autobots and even Simmons (John Tutturo) from previous movies, all having their own story lines to name a few! It seems like 5 different movies all happening at once, and the film has a tough time trying to blend it all together.

Well it’s not all bad news. The reason we watch Transformers is for the Autobots v Deceptions chaos, and the finale is utterly bonkers! The Dinobots also make a return, even Dragonstorm, a 3 headed dragon bot joins in on the madness! It’s all ridiculously over the top, and that’s what Transformers is all about. In a film that clocks up at 2 hour 30 minutes, it really should be more of this, and less of the humans! Sir Edmund Burton, played by Anthony Hopkins, the eccentric British aristocrat is a joy. It’s absolutely clear that Hopkins is simply here to have a bit of fun (along with the paycheck!), and his exaggerated performance matches a movie which is exactly that! His robot butler also has a few moments of laughter,

That’s about it though, as the majority of the movie is just frustrating.  We have an submarine journey that really could have been cut out, the aspect ratio is all over the place, flicking between IMAX and widescreen throughout the movie, even changing during the same conversation! You also still have the same problems of previous movies, although they have been tones down a lot. Vivian is portrayed as a smart, intelligent women, but she is randomly put in a tight dress with heels out of nowhere, just so the film can have a dig at her dress. It makes no sense for her to even be in that outfit, considering the situation they were in, and its clear it was all added in because Bay could use a stripper joke.  There’s also a random Suicide Squad like scene where we are introduced to random Decepeticons, why, no idea, but I supposed they saw Suicide Squad and thought, ”Yeah, that looks cool!!”.

Rumour has it that this will be the last movie directed by Micheal Bay,  hopefully he can call it a day, and let someone else take over the reign, someone who actually enjoys making these movies, rather than using it simply as a cash cow!