Following on from the immense success of The Dark Knight, Christopher Nolan, who had already scored hits such as Memento & The Prestige, was creating huge buzz and excitement with whatever his next project would be. What we got was a superbly stylish, deeply layered (pun intended!) movie. Inception may have been very ambitious with its design, but it has provided fans with several unforgettable scenes and a simply iconic score.

Dom Cobb (Di Caprio) is what they call in his business, an ‘Extractor’, along with his partner Arthur (Gordon-Levitt), they enter the dreams/unconscious of people to extract information, mainly for corporate espionage. After a botched mission, Cobb is offered a chance at redemption, and an opportunity to go back home, only if he carries out something known as ‘Inception’, the concept on planting an idea in someone’s mind. As skilled as Cobb & Arthur may be as Extractors, the idea of Inception could be even beyond their talents. But with the chance to see his children back home, he puts together a team, and heads out on his mission.

Off the bat, the movie is a visual treat; the dream concept allows the movie to create amazing set pieces, such as the mesmerizing folding streets of Paris, to the dazzling exploding café scene. There’s also the stunning corridor confrontation, in which Arthur is forced to fend off foes while the halls start rotating. What’s more incredible is that the entire scene was filmed within a structure, with no CGI! Everything is filmed perfectly, to make it look absolutely on point. With the cast all suited and booted, and the dream world setting, it is one classy film.

The cast is incredibly strong, you have Di Caprio as the star man, but the supporting cast are also a joy. Tom Hardy excels as Eames, his constant bickering with Arthur (Joseph Gordon-Levitt) and generally all round charm shines through. Ellen Page is the talented Ariadne, who has the most vital role in the operation. Her young character is pretty much how the audience feel at various points, pretty confused at times! You also have the likes of Ken Watanabe, Cillian Murphy and Marion Cotillard all contributing to a stellar cast. 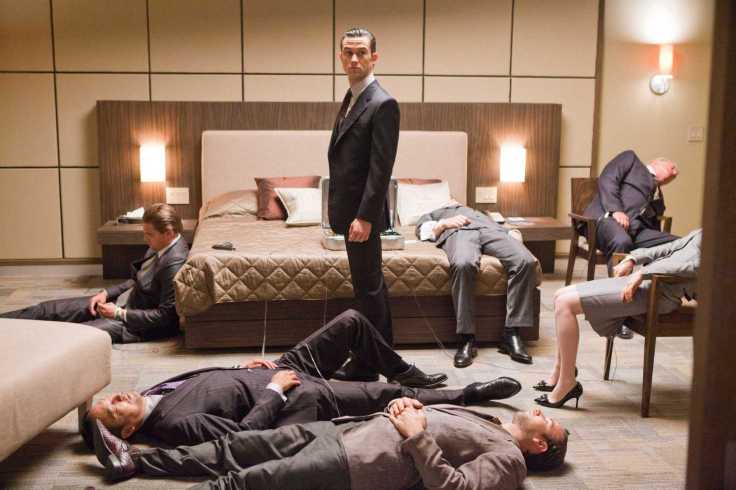 The plot is one that will take multiple viewings to really get any sense of what’s happening! To put it simply, there are layers, so many layers! In order to get an idea deep into someone’s unconscious, will not only require going into the dream of their target, but also several dreams within that. It can be a convoluted mess, and at times, you will probably not really grasp the finer details. But that’s what repeat viewings are for! The storyline may leave you puzzled at times, but the sheer spectacle and scale of the movie more than make up for it! It is an audacious project, and it has to be applauded for it. After multiple viewings, things will get clearer, and you’ll enjoy the movie even more!

Let’s not forget to mention the score, which is put together by legendary composer Hams Zimmer. Tracks such as the triumphant ‘Time’, and the pressing ‘Dream is Collapsing’ are synonymous with the film. The recurring lyrics from Non, je ne regrette rien will be stuck in your head after watching this, and then there’s the now iconic BOOONG! This now appears in pretty much most trailers nowadays! Combining such a quality score with the slick production, produces one impressive looking, and sounding 2.5 hours!

Though as great as it all looks and sounds, Inception will not be for everyone. The film is very dialogue heavy, with various key plot details hidden within various speeches. It is also a very slow burner, with the operation not commencing well past the first hour. The finale is also quite perplexing, especially if you weren’t paying attention in the finer details. But don’t let that take away from what is a thrilling, cerebral, and  enjoyable film.