After almost 20 years, we have the next chapter on the Bad Boys saga………is it just a cheap cash in, or do Smith & Lawrence still have that magic? Here’s our review!

The ringleader of the British weed empire is looking to offload his business and retire to a quieter life , though things become a whole lot messier when rival factions realise whats up for sale. Guy Ritchie serves up another British gangsta cracker!

Following a string of impressive DC releases, we have the latest incarnation of the legendary villain, The Joker. Can Phoenix match Ledger in bring the crown prince of crime to the big screen?

It’s a clash of two worlds as everyday man Stu, picks up the wrong customer in his Uber. A rugged vengeful cop drags our reluctant hero into a crime fuelled escapade. It’s good honest fun! 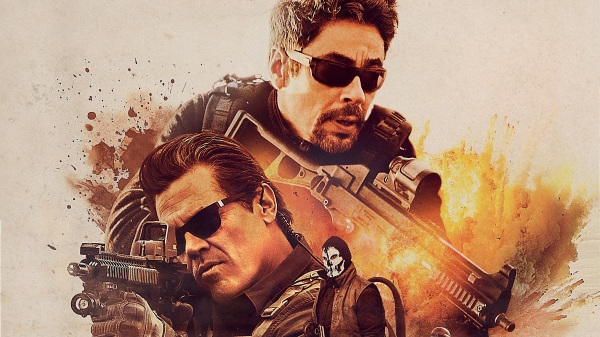 Incredibly intense and wonderfully filmed, Sicario was one of the stand out films of 2015.  The success of the original meant a sequel was inevitable, but without the influence of Denis Villeneuve and leading lady Emily Blunt, can this installment match the heights of the original?

Sicario : Day of the Soldado, directed this time, by Taylor Sheridan, follows CIA agent Graver (Brolin) as he once again enlists the assistance of rogue operative Alejandro (Del Toro) to destabilize the Mexican drug cartels, who are suspected of smuggling in terrorists across the US border. They aim to accomplish this by staging the kidnapping  of the young daughter (Moner) of the cartel kingpin, and in effect, creating a civil war.

The opening and middle chapters of the movie are still as potent as the original.  The film mixes the bloody violence and brutal nature of the cartels, with the meticulous nature of our agents well. Brolin who is having a very successful summer, is as fierce as ever. And Benicio Del Toro is the same mysterious, magnetic hitman from before. Although the film loses the character the audience could relate with (Blunt from Sicario), our duo as strong enough to keep her loss to a minimum. Isabela Moner, who yet again plays another young character with her namesake (after her role in The Last Knight!) also gives a great performance as a young girl caught up as the innocent pawn in a government covert operation. 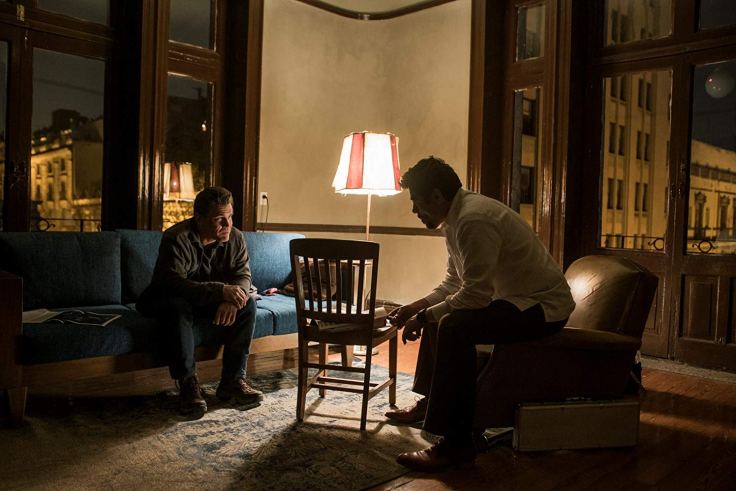 As the plot starts starts to come together towards the climax, is when things really start to fall off. It was reported that the original screenplay was changed, and the film loses its traction it begins with. The plot starts to leave far to many gaps, and character decisions that really go against their previous actions. Alejandro, who was a ruthless assassin, willing to kill children, suddenly develops paternal like behavior, in hardly any time. We also never really know who the true antagonist is, the cartels? The US government? It’s obvious to see that this is a part 2 of 3, leaving a bit too much unexplained for the third chapter. The operation itself rather falls apart way to quickly, for something that was planned with laser precision. Unfortunately the film makes decisions that feel like a cop out, where the first was praised for the gutsy decisions the script took.

The tension and suspense the film creates is still on point. There are moments in the movie you will honestly want to look away. The Beast, the daunting, yet iconic soundtrack from the original returns, and when it starts intensifying, the tension cranks all the way up! The ambush scene is magnificently shot, and comes out of nowhere!

Soldado is not a match to the original, but the characters are more than strong enough to carry the film onto the obvious third installment. Sadly it does feel like filler, but maybe after the final chapter, Soldado will look better in hindsight. 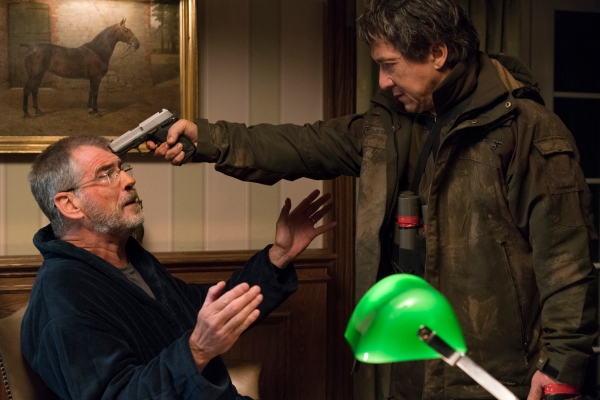 Jackie Chan is not usually seen in a serious tone in his movies over here in the West. Although he may be great as a comedic actor, he is also well known for his more dramatic roles back in the East. So fans were intrigued to see that the latest Chan movie to be released here, was a shift away from the norm here, and places him in a far more melancholic surrounding.

The Foreigner directed by Martin Campbell, is a fairly typical revenge thriller. Quan (Chan) is a worker, living a simple life in London, but following an IRA terrorist bombing, he loses his teenage daughter (Katie Lueng). Using all his military expertise from days gone past, he sets out on a relentless pursuit for answers, and to find the people responsible. This leads him to the doorstep of the deputy minister for Northern Ireland, Liam Hennessy (Brosnan).

Taken, this isn’t, but The Foreigner is still an enjoyable movie to sit down and watch. It’s far more interesting to see Chan as the broken down father figure, rather than what he  is usually type cast as, and all his scenes carry great intensity. There are several action scenes that make use of Chan, but they are not as vibrant as they usually are, it’s far more visceral and calculated. Brosnan is excellent as the charming deputy minister, bringing a strong gravitas to a film that really isn’t flooded with big names. His witty exchanges with his fellow cabinet members and staff still exude that 007 aura he had, even down to getting his hands messy if needs must.  The cat & mouse interactions between Quan & Hennessy are by far the most fascinating parts of the movie, though Hennessy insists he was not involved, Quan is adamant he must have known something, considering his powerful political position. 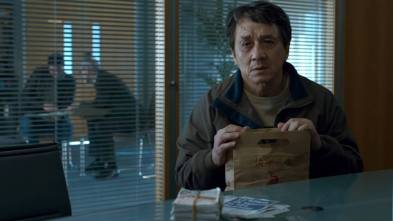 Where the film struggles is the overall story arc, the entire IRA subplot really does slow down the movie, and it gets drowned in a lot of dialogue and conversations.  The plot attempts to be far more intricate and layered than it really should have been. Any scene which does not involve Chan or Brosnan really feels like a drag.  The whole affair plot line has a resolution, but even then, it feels like it could have been written in a much more captivating manner.  Also, there could have been more scenes with Chan, as that really is the film’s strongest points.  Seeing Chan take out elite soldiers in the woods is far more interesting than political power plays. Quan is almost a secondary character compared to Hennessy. As good as Hennessy is, most people would be tuning into this for Chan, and they really didn’t make the most of that factor.

Overall, the movie does seem to drown itself with its plot at times, but the star power of Chan and the charm of Brosnan has enough to make The Foreigner worth a watch.

Based on the novel of the same name, Molly’s Game is based on the rise and fall of Molly Bloom, who in her 20s, was hosting the world’s most exclusive Poker tournaments in both LA & NYC.  Attracting the biggest names in Hollywood, sports and business, her game was rolling in millions, before inevitably getting the unwanted attention of organised crime & the mafia.

Before taking up her place in law school, Molly Bloom (Chastain) decides to take a year out, taking up part time jobs to support herself. During this time, while working as an assistant, she gets introduced to the world of underground Poker, planning the logistics for her boss’s poker nights. It’s not before long, she uses her wits & smarts to get her foot into this lavish lifestyle, and has her own business running. But after falling foul to the law, she needs to rely on her charismatic defense attorney, Charlie Jaffey (Elba) in order to avoid the full brunt off the law.

The film has been referred to in the same breath as The Wolf of Wall Street, and in a sense, it is a similar story, they both start from nothing, earning millions, before the collapse of a mighty empire. But unlike TWOWS, where all the activity was clearly illegal from the start, Molly does her best to keep things as legal as possible. Chastain is brilliant as Molly, bringing a certain likability and dynamism to the character. Though the business she takes partakes in, is morally askew, for most parts, she stays on the right side of things. Her monologues are full of wit and sarcasm, which makes her character thoroughly entertaining. Her interactions with Elba are also highly amusing, both characters are intelligent and charming, so their verbal sparring is great fun to watch.  Their characters also avoid the trap of falling into a clichéd romance, which was a nice change for once.

The most captivating parts of the film are obviously all the Poker scenes, where they flashback to the events prior to her arrest. You don’t have to be an expert in Poker to know what is going on, as the movie explains everything in an engaging fashion. Not to mention, the real life addition of a big time Hollywood celebrity (whose identity can be easily found out with a quick search online!) adds an interesting dimension to the story. These are the parts of the movie you’ve come to see, and Chastain carries all of them with supreme grace.

Though most of the film is compelling to watch, the film really suffers in the final act. With her relationship with her father (Kevin Costner) playing a pivotal role. The film grinds to a halt, and adds an unnecessary 20 minutes to the entire movie.  That really is the only real flaw that could be said about a film that for most parts, it’s mighty enjoyable. Of course some liberties are taken from the source material, in order to make the film more enjoyable, but that’s to be expected for any book that is converted for the big screen.

Coming out of New Year, Molly’s Game is a perfect way to start the year at the cinema! Yes the finale is underwhelming, the majority of the movie is riveting.