Jackie Chan is not usually seen in a serious tone in his movies over here in the West. Although he may be great as a comedic actor, he is also well known for his more dramatic roles back in the East. So fans were intrigued to see that the latest Chan movie to be released here, was a shift away from the norm here, and places him in a far more melancholic surrounding. 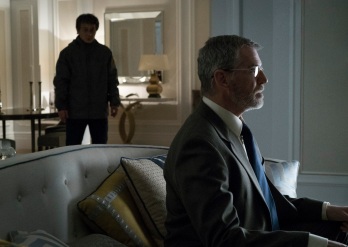 The Foreigner directed by Martin Campbell, is a fairly typical revenge thriller. Quan (Chan) is a worker, living a simple life in London, but following an IRA terrorist bombing, he loses his teenage daughter (Katie Lueng). Using all his military expertise from days gone past, he sets out on a relentless pursuit for answers, and to find the people responsible. This leads him to the doorstep of the deputy minister for Northern Ireland, Liam Hennessy (Brosnan).

Taken, this isn’t, but The Foreigner is still an enjoyable movie to sit down and watch. It’s far more interesting to see Chan as the broken down father figure, rather than what he  is usually type cast as, and all his scenes carry great intensity. There are several action scenes that make use of Chan, but they are not as vibrant as they usually are, it’s far more visceral and calculated. Brosnan is excellent as the charming deputy minister, bringing a strong gravitas to a film that really isn’t flooded with big names. His witty exchanges with his fellow cabinet members and staff still exude that 007 aura he had, even down to getting his hands messy if needs must.  The cat & mouse interactions between Quan & Hennessy are by far the most fascinating parts of the movie, though Hennessy insists he was not involved, Quan is adamant he must have known something, considering his powerful political position.

Where the film struggles is the overall story arc, the entire IRA subplot really does slow down the movie, and it gets drowned in a lot of dialogue and conversations.  The plot attempts to be far more intricate and layered than it really should have been. Any scene which does not involve Chan or Brosnan really feels like a drag.  The whole affair plot line has a resolution, but even then, it feels like it could have been written in a much more captivating manner.  Also, there could have been more scenes with Chan, as that really is the film’s strongest points.  Seeing Chan take out elite soldiers in the woods is far more interesting than political power plays. Quan is almost a secondary character compared to Hennessy. As good as Hennessy is, most people would be tuning into this for Chan, and they really didn’t make the most of that factor.

Overall, the movie does seem to drown itself with its plot at times, but the star power of Chan and the charm of Brosnan has enough to make The Foreigner worth a watch.