Director Edgar Wright (“The Three Flavours Cornetto” trilogy, “Scott Pilgrim vs. The World”) has masterfully intertwined the kick-ass soundtrack with the beat of the film in this crazy, and sometimes surprisingly violent, heist story. If only the characters meshed as successfully as the sound and cinematography.

The film follows extremely talented getaway driver and tinnitus sufferer “Baby” (Ansel Elgort) as he works off a debt to big criminal boss man “Doc” (Kevin Spacey). Along the way he meets a girl, “Debora” (Lily James), who has a similar quirky relationship with music as our lead, they immediately click and have plans to runaway together. But, of course, when Doc calls, Baby MUST answer if wants those he loves to live. And with the introduction of “Bats” (Jamie Foxx) into the crew, there is no end to the trouble they’re about to trigger.

The atmosphere to begin is very light hearted and funny; we are led to believe that a dangerous bank robbery is very serious business, until Baby starts miming vigorously along with his track. We are returned to reality when the car chases start and they are solid. The stunt drivers in this film are ridiculously on point, of course they had to be with this title and storyline. The camera flows fluently through the different shots and angles following the getaway car drift effortlessly through roads and alleys, and pulling off some absolutely stunning tricks. All the while staying on the beat of the track.

Even walking down the street in this movie looks cool, continuing to stay in time with the music, Elgort is far removed from the whiny brother of Tris in the Divergent series. We even find he has a heart of gold, living with his deaf paraplegic friend Joseph (CJ Jones) who Baby assures the jobs are nearly done.

The insertion of Jamie Foxx leads the story down a darker path. Although I find his behaviour unnecessarily over the top, a common portrayal of slightly insane criminals in movies, he is a distinct contrast to the other somewhat one-dimensional characters and a necessary evil to change the course of the storyline. From this point the scenes get crazier and the violence bloodier, and all the while Elgort and James maintain their sweet romance.

I personally think that Jamie Foxx could easily have been replaced by Jon Bernthal, and it would have given Bernthal a bigger part in the movie instead of the rather redundant character of “Griff” he plays at the beginning. There’s not much to say about the other characters, we don’t know much about Baby’s love interest other than she will inexplicably follow Baby anywhere. “Buddy” (Jon Hamm) and “Darling” (Eliza Gonzalez) are a conventional criminal couple, crazy for each other and just crazy in general. And it’s evident that Kevin Spacey has a soft spot for Baby in the end. 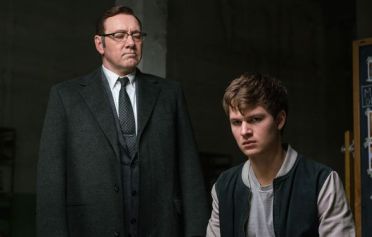 This movie probably should have stuck with the light-hearted feel from the beginning, even with the guns and bloodshed, and the characters definitely could have done with a little more chemistry. That being said, if you want to a watch a heist movie with car chases, shoot-outs, a little romance, crazy criminals, and a sweet soundtrack to top it off, go and watch this now!

Even though I wasn’t a fan of Jamie Foxx in this movie, and this scene was in the trailer, it still made me giggle….