This summer has been pretty low-key in regards to well acclaimed blockbusters, can War for the Planet of the Apes (let’s just call it War from here on!) succeed where films such as The Mummy, Transformers & Baywatch stumbled?

War is the final chapter of the newly rebooted Planet of the Apes franchise, which started with Rise in 2011 and Dawn in 2014, both movies were well received by both fans and critics, so hopes were high for War.

The final chapter sees our main protagonist, Caesar (Andy Serkis) once again lead his colony of apes, as they look to escape to terrains new, and save his people (apes!) from the ruthless clutches of Colonel (Woody Harrelson).  With the help of his close allies, Caesar puts it all on the line, to once and for all,  put an end to the plight his colonyface.

War is an enthralling adventure, and it’s a movie you can enjoy as a standalone, without having much knowledge of the prior 2 movies. I haven’t had the chance to watch either Rise or Dawn, and did worry things may not make much sense! But the movie does a great job in dropping in details of prior movies without breaking the flow of the movie, there were reference to prior characters and events, but even as someone watching without knowing the lore, you can still piece it all together.  Not seeing the other two will not affect your enjoyment in any huge way.

By far the most fantastic aspect of the movie is the motion capture, it is frankly stunning. This series has done wonders in giving actors in motion capture the recognition they deserve. Andy Serkis has been widely praised for his performances in the Apes movies, and rightly so. It cannot be easy to act in total green screen, while moving and acting in the ways an ape would.  If you have the time, do go and look at the behind the scenes footage, to see how much work is put into motion capture! It’s also the sheer detail of the apes that is amazing. There are several close ups throughout the movie that flaunt how much attention to detail was put it, especially with Maurice. The snowy settings up in the mountains really do provide a gorgeous backdrop the the film. It really is a great to look at.

Caesar’s story arc is one of revenge, which seems him go on a mission to take down the sinister Colonel, but he is joined by a group of his closest allies. Maurice (Karin Konoval), the Orangutan, who is Caesars top adviser, and one of the more heart warming characters in a somber movie.  Luca (Micael Adamthwaite) the Gorilla, and Rocket (Terry Notary) the Chimpanzee lend the muscle, as they also join our hero on his mission. Along the way, they meet a mute girl, Nova (Amiah Miller), who a reluctant Caesar brings along, due to the protestations of Maurice. They also meet Bad Ape (Steve Zahn), the token comic relief, and a  runaway chimp who suffered after his time imprisoned at a Zoo.  Bad Ape could have gone awry,  but his fragile mentality was a good method to make him say what he does in these grim situations.

War is an emotional ride, as several characters meet their demise, and director Matt Reeves manages to make us care and feel the struggle of a group on non human characters, which alone could have been hard to do. While there are huge epic set pieces in the film, at it’s heart, it’s a sober tale of war and suffering. You believe any one of our characters could meet their end at any moment.

The plot is rather straightforward to follow,  it’s nothing groundbreaking. But it’s the tone and execution of the film that makes it wonderful to watch. Be it the sheer panic of the battle scenes, the desperation of the prison camps or the grit shown by Caeser in the face of torture and oppression. The story weaves it all in one engrossing adventure. Be prepared to be reading loads of subtitles though, apart from Caesar, Bad Ape and the humans, the rest interact in their own language. So if you are not a fan of subtitles, you have been warned! 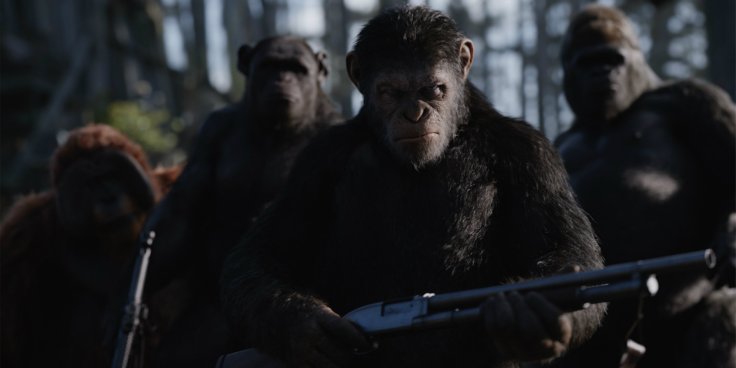 Woody Harrelson does fine as our antagonist, the film gives us a reason to hate him, and his treatment of the imprisoned apes are barbaric. But, he just feels slightly rushed through. His character did not appear in any prior movies, so feels pretty dispensable. Is this guy really the one who the 3 movies lead up to?  You would think the final part of trilogy would have the long standing enemy at its core. Also, his grand plan really made no sense. Which was to build a frankly useless wall! Yes he was evil, but not really the smartest of villains,  I would have preferred a far more calculating villain, to match the astute Caesar.

The running time of almost 2:30 hours is vastly inflated. The film could have been told in a much shorter amount of time, and you do feel like it is dragging on as the film approaches its finale.

War deserves all the plaudits it’s receiving, and it provides a suitable ending to the trilogy. You really root for our heroes to succeed,  and want to rally behind them. You really grow to despise the Army, and that ticks all the boxes even at the very basic levels of story telling. The action and battle scenes are intense, and surprisingly violent! Combined with the gorgeous visuals , War is one of the films of this Summer! Apes Together Strong…….