Jurassic World was a triumphant return back to the big screen for the Jurassic Park franchise, after a 14 year hiatus since Jurassic Park 3.  JW received not only glowing reviews, but took in a staggering $1.6bn at the box office, so no pressure on the sequel…. 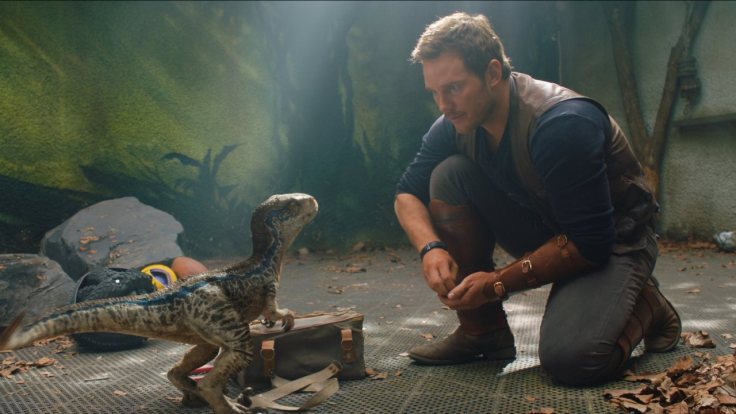 Essentially, the movie is what you expect from a huge Summer blockbuster, it’s an impressive spectacle, dazzling CGI, hugely thrilling and comedic banter. But it does fail with its story, as the plot regresses back to the usual weaponized dinosaurs arch we have already seen.

The chemistry between our leads is far more cohesive here, their interactions feel less forced than it did in JW, FK gives them far more to do, and they break out of the typecasts they had in the first one. Claire is far more interesting as the head of a Dinosaur conservation group, rather than the dull, cold, career focused executive. The film also makes firm point regarding the boots she now wears, after the heels debacle from the last film!  They are joined on their adventure by fellow conservation staff members’ Zia Rodriguez (Daniella Pineda), a sassy and sharp witted veterinarian, and Franklin Webb (Justice Smith), the systems analyst, his character does grate a lot, as he is pretty much reduced to the petrified screaming comic relief, though he does tone it down over the course of the movie, Zia is far more tolerable as a character.

The dinosaurs are of course the reason why we’re here! Blue, the surviving member of Owen’s raptor squad is back, and has a leading role! The film can be split into 2, the island rescue, and back at the Lockwood mansion. The island scenes are amazing to watch, the CGI is as always stunning, and the inevitable fate of the island does lead to a frankly very emotional scene as our heroes make their escape. The big gun for this film is another hybrid creation, the Indoraptor, the cross between the Indominus Rex from JW, and a raptor. It of course escapes, and stalks our protagonists as they attempt to stop the plans of our villain. In all honestly, the Indoraptor does not feel like anything special, and still gets outshone by the T-Rex. Although Blue is still an enjoyable addition to the Jurassic clan, it has rather subdued the wicked nature of the deadly Velociraptors from movies past, now seeming more like a charming sidekick, than its previous iterations.

The villain of the story is where things start to fall apart, who is simply a generic suit who just wants to get rich quick. It’s pretty obvious from the start who is the underlying antagonist, and it really does hurt the plot. While it is a fresh change to take the adventure away from the island setting, the weaponized dinosaurs storyline still feels ridiculous, in a film containing dinosaurs! The final 3rd of the does’ drag on for a tad too long, as our heroes are stalked through the mansion by the genetic raptor, if could have been concluded far more swiftly. There is also a ridiculous twist regarding the granddaughter of the mansion, which is utterly brushed over by the characters, and feels like a contrived plot device for the films end. The Mosasaurus, the gigantic ocean beast, which featured in the trailers, was seriously underused.

Fallen Kingdom does feel far more unique than its predecessor, JW felt like a simple remake of the original JP, whereas FK stands alone far better, with a far more warming duo and change of scenery. It’s not an outstanding outing, but fans of the last film will have no reason to not enjoy this!